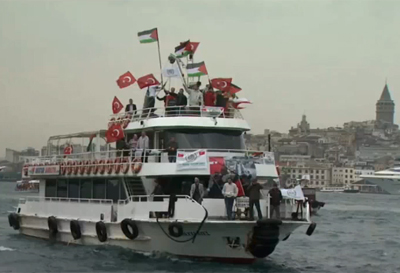 Affaires étrangères
International
In their capacity of Co-chairs of the EU-Turkey Joint Parliamentary Committee, Mr Lütfi Elvan (AKP – Karaman Turkey) and Ms Hélène Flautre (Greens/EFA – France), send their condolences to the families and close ones of all those who lost their lives and strongly condemn the attack by the Israeli authorities on six civil boats bringing essential humanitarian supplies to the Gaza Strip.

Hélène Flautre, President of the European delegation to the JPC, urges the EU to collaborate with Turkey in the framework of the UN Security Council so as to establish an international enquiry to shed light on the circumstances surrounding this attack and to guarantee full accountability. Hélène Flautre also calls on the EU High Representative Ashton to immediately visit the country in order to assess and to react adequately to the situation, notably by doing her utmost to avoid escalating tensions.

Lütfi Elvan, President of the Turkish delegation to the JPC, expresses that the humanitarian aid is organized by NGOs from 32 different countries. The aid was being taken to Gaza with ships carrying white flags. Lütfi ELVAN urges these countries to take all the necessary actions in the framework of the UN Security Council.

Both of them ended by recalling the necessity of an immediate an unconditional free access to Gaza as well as the establishment of a two- state solution.